The invention of the hamburger sandwich is the topic of much debate with diverse origin stories, like many American inventions, stemming from the absence of mass media, the distance between the regions of supposed invention and the common necessity shared by consumers in all of the locales.

The earliest account comes from, of all places, Wisconsin where Charlie Nagreen of Seymour, Wisconsin sold the first documented flattened meat patty sandwich. In 1885, at the age of 15, he sold these out of his ox-drawn food stand at the Outagamie County Fair.

He went to the Outagamie County Fair to sell meat balls, but business was not going well and he quickly realized that it was because meatballs were too difficult to eat while walking around. Thus, he flattened the meatballs, placed them between two slices of bread and called his new creation a hamburger; this despite the fact that meatballs, not Hamburg-style steak, were the genesis of his sandwich. This story, however, was codified in 2007 when the Wisconsin state legislature declared Seymour, Wisconsin as the birthplace of the hamburger1.

The first account of serving a hamburger on a bun originates in Tulsa, Oklahoma on July 4, 18912. Michael Wallis, travel writer and reporter for Oklahoma Today, a local magazine, did an extensive search in 1995 for the true origins of the hamburger and determined that Oscar Weber Bilby was the creator of the hamburger as we know it. Although his family concedes that hamburgers on bread may have existed earlier, Wallis’s 1995 article, Welcome to Hamburger Heaven depicts Bilby as the originator of the hamburger on a bun. Wallis interviews members of Bilby’s family who bolster this claim, including his grandson Harold who states: “There’s not even the trace of a doubt in my mind… My grandpa invented the hamburger on a bun right here in what became Oklahoma, and if anybody wants to say different, then let them prove otherwise”3. Such a source of state pride and history that it prompted Gov. Keating in 1995, in light of Willis’ article and the Webers’ story, to declare: “I, Frank Keating, Governor of the State of Oklahoma, do hereby proclaim April 12, 1995, as The Real Birthplace of the Hamburger in Tulsa Day.” 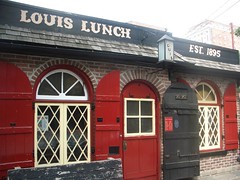 Another claim to the invention of the hamburger comes from Louis Lunch in New Haven, Connecticut. As the story goes a patron came in asking for a meal he could take to go, the owner Louis Lassen thinking on his feet, put a broiled beef patty in between two slices of bread5 and may have accidentally created something that would later become an American icon.

Like many inventions the true genesis of the hamburger may never be known. The tales and regional histories make valid points and claims which may all be fact or legend, but nonetheless contribute to the mystique of the hamburger.

5 Beckius, Kim Knox Visit the Birthplace of the Hamburger